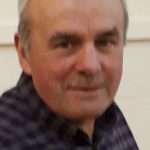 In his talk on Eight Contemporary Painters which He gave to a very well supported meeting following our AGM, Dr Chris Davies gave us a most informative and interesting talk about eight contemporary painters as he explored the continuing practice of painting by these artists at a time when there has been a movement in some art school circles to denigrate its importance.

The works he showed us were extremely varied with some artists going for versions of figurative realism, others heavy on irony and social comment and others exploring abstraction.  Some of the works arrested me, others I would consign to the bin despite the inflated prices they might command.  Such is the way things are and it is nothing new as fashion and the rhetoric surrounding “art” shifts.

He started his talk however with what was a valuable and clear summary of the way there has been a move from 20th century Modernism to contemporary Post-Modernism, a term easily shrouded in mystery. He makes it clearer than anything I have come across, so here is what he said.

Despite all attempts to claim that painting is dead nevertheless painting as a medium continues to survive and is still viewed as the best means to capture sophisticated ideas and thoughts. My talk today will explore with you the contribution of eight contemporary painters to this renaissance.. But to fully grasp what has taken place in contemporary painting it is crucial to understand the impact of what is termed postmodernisn on studio practice.

Postmodernism can be seen as a reaction against the ideas and values of modernism, as well as a description of the period that followed modernism’s dominance in cultural theory and practice in the early and middle decades of the twentieth century. The term is associated with scepticism, irony and philosophical critiques of the concepts of universal truths and objective reality. Postmodernism was a reaction against modernism. Modernism was generally based on idealism and a utopian vision of human life and society and a belief in progress. It assumed that certain ultimate universal principles or truths such as those formulated by religion or science could be used to understand or explain reality. Modernist artists experimented with form, technique and processes rather than focusing on subjects, believing they find a way of purely reflecting the modern world.

The term was first used around 1970. As an art movement postmodernism to some extent defies definition – as there is no one postmodern style or theory on which it is hinged. It embraces many different approaches to art making, and may be said to begin with pop art in the 1960s and to embrace much of what followed including conceptual art, neo-expressionism, feminist art, and the Young British Artists of the 1990s.

While modernism was based on idealism and reason, postmodernism was born of scepticism and a suspicion of reason. It challenged the notion that there are universal certainties or truths. Postmodern art drew on philosophy of the mid to late twentieth century, and advocated that individual experience and interpretation of our experience was more concrete than abstract principles. While the modernists championed clarity and simplicity; postmodernism embraced complex and often contradictory layers of meaning.

Anti-authoritarian by nature, postmodernism refused to recognise the authority of any single style or definition of what art should be. It collapsed the distinction between high culture and mass or popular culture, between art and everyday life. Because postmodernism broke the established rules about style, it introduced a new era of freedom and a sense that ‘anything goes’. Often funny, tongue-in-cheek or ludicrous; it can be confrontational and controversial, challenging the boundaries of taste; but most crucially, it reflects a self-awareness of style itself. Often mixing different artistic and popular styles and media, postmodernist art can also consciously and self-consciously borrow from or ironically comment on a range of styles from the past.

Appropriation is a key concept in post-modern painting. Contemporary painters appropriate or borrow from an eclectic range of sources and influences: art history, popular culture, film, television, media, architecture. Originality, which was a key driving force in late Modernist art is of less importance to many contemporary painters.