Jenny Farrer  has just sent me this report:  Believe it or not I got the date wrong and was languishing at home doing nothing significant.  What a wonderful day I missed.
Dear John,
I’ve been deputed to write a report about our painting day yesterday.  Here are some photographs to begin with. 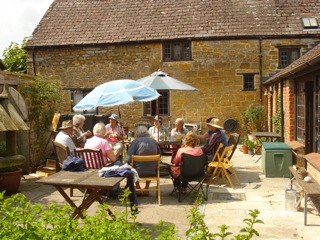 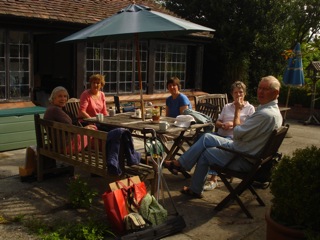 The day started off very well with Will and Pek providing delicious real coffee as people started to dribble in.  More and more arrived and in the end there were 13 of us.  Whether it was the weather or that it was at our Chairman’s historic house or because people didn’t have anything else on, it was a very good turnout.
It was particularly nice to see some of our new members there,  including Damaris Lee, Fletcher Robinson and Mary Rutterford.
It was a rare occasion because it didn’t even feel like it was going to rain.  We were given plenty of places to choose from including Biddy Peppin’s lovely garden next door.  There were groups painting buildings in one direction and others painting the various views in the garden.  There was lots to choose from and everyone settled down by about 10.30 and we continued until  just before 1.00 o’clock. 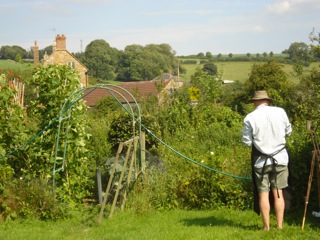 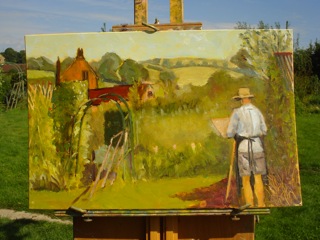 It was a very convivial lunch as everyone got out their various picnics or shared what they had with one or two people who hadn’t brought anything.  It was more like a party and the dicibel levels rose accordingly.  Will generously provided beer  and wine for those who wanted stronger beverages and orange juice for those who didn’t.   We then returned to our various paintings and some amongst us started a second one as the light had changed.
As people finished their paintings they packed up and left one by one after hunting for our generous host to bid farewell and to thank him.   It was unusual to have so many painters still there in the afternoon.  I think I was about the last to leave.  We were also privileged to be able to visit Biddy Peppin’s studio where she had all her recent work displayed and it was very impressive.
Jenny
A full list of those attending were:  Katharine Skillen, Rosemary Eastaugh, Christine Widgery, Damaris Lee, Fletcher Robinson, Jane Onslow, Clive Dand, Jenny Farrer, Biddy Moreton, Tessa McIntyre, Mary Rutterford, William Vaughan and Swan Lennard Payne.