We had an extremely good turnout of over fifty at the hall in North Cadbury and with generous donations of snacks to eat with the tea, the combination of social occasion and lecture made for a fitting end to our year. Here is Will’s report on Juliet Heslewood’s fine talk. 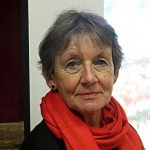 Juliet Heslewood is an author and art historian. She has published widely on art, including a fascinating series exploring artists’ representation of members of their family and friends. During a 30 years residence in the south of France she developed a particular interest in painters working in Provence. This lecture was based on her researches there.

She began by reminding us that Provence is most associated with leading post Impressionists – with Van Gogh and Gauguin in Arles and Cezanne in nearby Aix. But she then moved us back in time to the early eighteenth century, showing us that the terrain – with its strong lighting effects, broad planes and distinctive rock formations – had attracted earlier artist such as Claude-Joseph Vernet, who came from nearby Avignon. Such artists gave the landscape a classical look. The Post-Impressionists approached it from a very different position. Coming from a modern urbanized generation seeking to reconnect with nature, they looked to the south of France as a resource for more primitive and nobler human values. Many had already gone to Brittany in this quest before travelling further South to Provence.

Van Gogh came hoping to establish and artistic colony in Arles.(ill.1) He was attracted not just by the exotic nature of the south, but also by the art of a painter little talked of today. This was Adolphe Monticelli, a native of Marseilles, who interpreted the South in the mid-nineteenth century in a vigorous manner, using thick paint and broad brushwork. Van Gogh’s stay in Arles was relatively short and disastrous, leading in particular to his violent falling out with Gauguin, the artist with whom he hoped to found his artistic colony. Juliet showed us tellingly the different ways in which the two artists approached Arles. Van Gogh was encouraged to go to new extremes of expression with his colours and forms, while Gauguin was always more reserved and distant. Arles was not exotic enough for him, and he was soon off to discover his own source of the primitive in Tahiti. Juliet also explored the way in which Van Gogh’s representation of Arles has become the focus of modern tourism, which often threatens to destroy the very sites that visitors come to admire.

She then went on to explore the more measured and reflective approach of Cezanne, in particular his treatment of Mont St.Victoire, (ill.2) the mountain whose rocky slopes encouraged that breaking up of forms that led to Post-Impressionism late becoming an inspiration for the Cubists.

The talk did not end there. Juliet ended by introducing us to an artist little known over here. This was Leo Lélée (ill.3). This artist was painting in Provence in the twentieth century and he might be seen as trying to provide an antidote to the images of the region generated by the Post-Impressionists. He was himself influenced by contemporary artistic movements. His strong linear style shows a particular debt to Art Nouveau and even, in its later phases, to Art Deco. But his main concern was to record the life and practices of the region, which he did with great sympathy.

It is significant that, while Lélée is greatly venerated today in the region and is well represented in local museums, he is little known elsewhere. In most art books the region still remains associated primarily with the Post-Impressionists. Juliet’s excellent lecture gave us a fascinating insight into a richer and more varied view of the region. There was certainly plenty to think about here.
Will Vaughan