Gwen Yarker, Inquisitive Eyes: Slade Painters in Edwardian Wessex, Talk for the Bruton Art Society at the Shambles, Market House, Castle Cary, 19 April.
There was a packed audience for Gwen Yarker’s talk at the Shambles on 19 April. Gwen came to 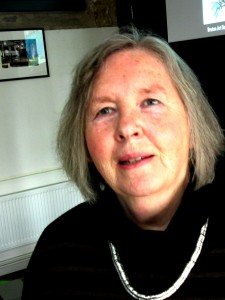 tell us about the artists who form the basis of the exhibition, Inquisitive Eyes that she has curated and that is currently on show at the Royal West of England Academy in Bristol. The artists were a remarkable group. They included many of the most advanced young painters at work in the Britain in the early twentieth century, such as Augustus John [Fig.1] , William Orpen and Vanessa Bell. Through her researches into the Dorset painter John Everett, Gwen has discovered that these artists were in the habit of spending their summer months painting along the Dorset coast. To a large extent the artists came here because of Everett..The son of a wealthy vicar, he studied at the Slade in the 1890s. It was while studying at the Slade that he became a close friend of John and Orpen, as well as making the acquaintance of such inspirational teachers as Wilson Steer and Henry Tonks.
He offered them all hospitality in his native Dorset. Gwen made it clear that Everett’s mother – who took the unusual step of enrolling at the Slade as the same time as her son – also played a key role in encouraging artists to come and spend time in the West. A strong-minded woman with pronounced Bohemian sympathies, she provided a welcome refuge for the artists – many of whom were struggling and penniless. However, the Everetts were not responsible for all the artists who turned up in Dorset at that time.
Co-incidentally members of the Bloomsbury circle came to summer nearby, leading to fine views of the Dorset coast being painted by Roger Fry and Virginia Woolf’s sister Vanessa Bell. Indeed, a view of Studland Beach by Bell[Fig.2] has subsequently been hailed by experts as one of the most advanced paintings in Britain of the period.

Gwen also showed us that the relatively little known John Everett was himself an artist of considerable talent. While absorbing the art of the then fashionable Impressionists as a student, he reached back as well to earlier British landscapists, in particular Turner and Constable. Like such artists he was obsessed by atmospherics and engaged in vigorous direct painting of skies. The most striking of these are seascapes that deserve to be much better known. [Fig.3] As well as painting, Everett had a passion for sailing, and something of both these enthusiasm comes over in these fascinating studies.

Gwen’s talk gave us a rich and complex view of an aspect of artistic life in Britain in the early twentieth century that has until now been overlooked. This should provide an inducement, for those of us who have not done so already, to go to Bristol to see the fine work she was discussing.