The Easter school holidays offered an opportunity for Marie-Hélène and I to introduce Amelia, our 5 year old daughter and budding artist, to the Impressionists. First stop, the lovely ‘Capturing Light’ exhibition at the Holborne Museum, Bath. There we admired Sargent’s famous oil sketch of Monet painting by the edge of a wood, with his wife Camilla sitting in the background. This is the painting that took Sargent from the studio into the outdoors to paint natural light and atmosphere. Sketchy it may be, but intriguing small details caught our attention, such as the tails hanging down from Monet’s strangely voluminous coat, and the red flash of her petticoat. 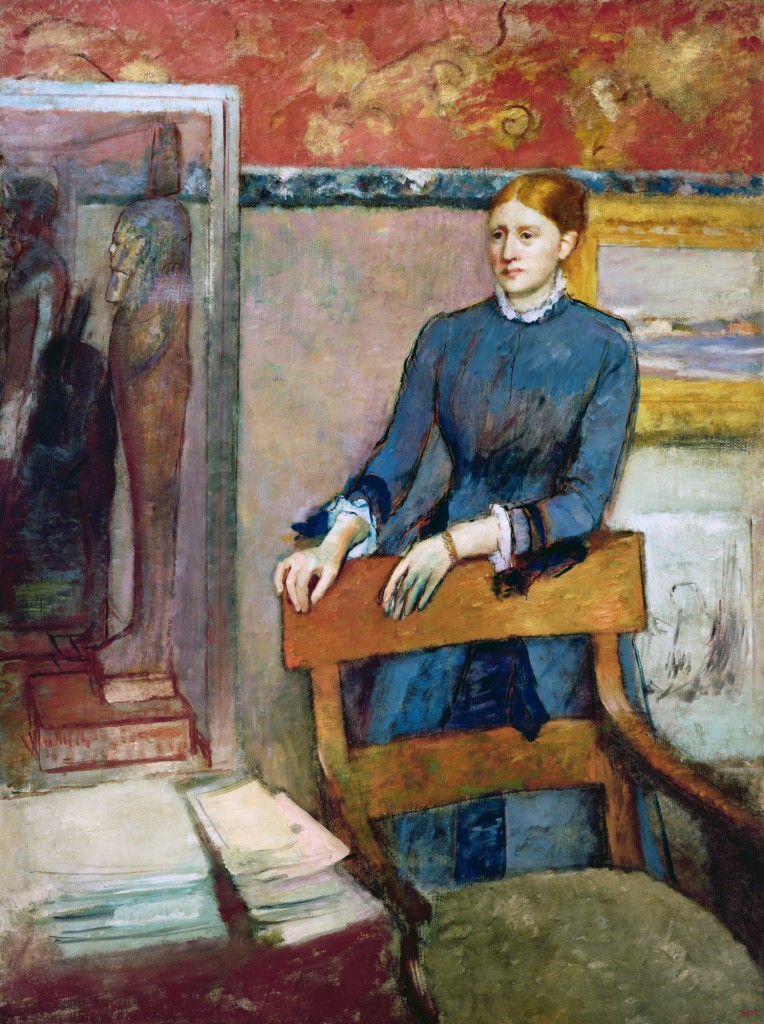 Then we wondered why the armchair in the foreground of the portrait of Hélène Rouart by Degas is so improbably large, and what the horse is doing in the water in Seurat’s Study for ‘Une Baignade’? ‘It’s cleaning its shoes, Daddy!’ said Amelia.

Then to London to see the ‘ Painting The Modern Garden’ exhibition at the RA. It was packed, so Mummy stood guard while Amelia lay on the floor to draw. It includes many rarely seen paintings from public galleries and bank vaults scattered around the world, including a gigantic Renoir from Pittsburgh, and a superb Pissarro of his daughter Minette sitting in a garden.

The star of the show, or at any rate the loudest painting, must be Sorolla’s huge portrait of Louis Comfort Tiffany. The famous designer is depicted in the lavishly stocked garden of his magnificent weekend home, Laurelton Hall, at Oyster Bay, Long Island. He is painting at his easel, but is improbably dressed for such an activity. He wears a white summer suit, starched collar and silk tie, and expensive cufflinks. If my wife caught me painting in an outfit like that, there would be all hell to pay! Our own favourite exhibit is Bonnard’s eight foot long ‘Resting in the Garden’ 1914 . Amelia thought the ginger cat was the cutest cat she had ever seen. And, as so often with Bonnard, there is something else on the lunch table beside the basket of cherries and the soup tureen, but no-one can say what it is.

Then we took the Portsmouth ferry to Caen to stay with Marie-Elizabeth, my wife’s French cousin, in a village called Etalleville in Upper Normandy. To give you some idea of the warmth of her welcome, she cooked no less than 32 crepes for Amelia over the course of the next 5 days! (We have re-named the village ‘Crêpeville’). In between the four course feasts we did manage to find time for the Impressionist trail. One day we went to Êtretat to see the famous arches in the cliffs, and on another to see the now built up beach at Ste Adresse, both favourite subjects of Monet. It is not difficult to picture these beaches in the 1880s, busy with fishing boats being launched and beached on the shingle, men repairing nets, rows of horse-drawn bathing huts, women and children gathering pebbles and throwing them in big baskets carried by donkeys for sale to the silica-using industries, and, at Êtretat, rows of washer-women scrubbing linen in the fresh spring water rising on the beach, both for the hotels and their private clients. 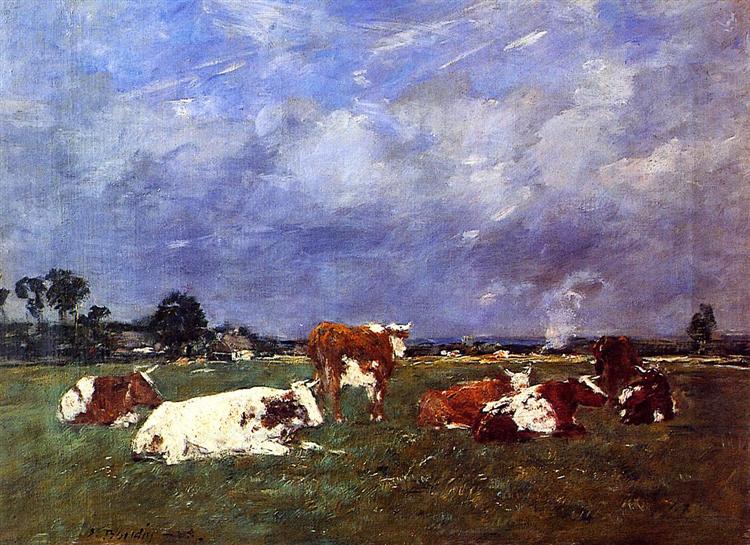 For me, the highlight of our stay was the Musée Malraux (MuMa) in Le Havre. There you will find the famous wall of Eugène Boudin’s oil-sketches, mainly of cows and clouds. Monet said that Boudin taught him everything he knew. He was a man who loved painting cows, whether in the fields , on the dockside, or put to graze on the race-course at Deauville. In his own words: ‘Toutes les occasions sont pretexte à boeuffer’ (that’s not a verb you will find in the standard school French dictionary: it means doing cow pictures!). We missed by a week the opening of a major Boudin retrospective which runs 16 April- 26 September 2016.

The museum also owns a lovely landscape of Champrosay by Delacroix, painted very thinly with a big brush. Back in London, we saw the marvellous Delacroix exhibition at the National Gallery. He was another big influence on the Impressionists, perhaps the greatest, and there are several of their works represented in the exhibition. Monet, Renoir and Bazille all attended the sale of Delacroix’s studio in 1863, which included virtually all his landscape studies in oil and water-colours.

Our visit to this superb exhibition was rather spoilt by an officious guard, who told Amelia that she was not to use coloured pencils, only lead ones. Predictably, this provoked a storm of protest from passers-by, including an irate American woman who insisted that my wife should immediately summon someone from the Director’s Office. A flustered looking young man arrived at the double. He assured us that ‘all dry media including coloured pencils are allowed’, and that the guard had misunderstood his instructions. I saw Amelia looking about in order to give the offending guard what I call ‘The Look of Triumph’ , but he had wisely beaten a hasty retreat.