Manet and the Modern

In his  illustrated talk Will set out to explain why Edouard Manet has been regarded both in his own time by leading artists and subsequently by art historians as the artist who was most successful in getting artists to engage with the modern world.

Unlike Monet who was a leading member of the Impressionists, and often thought of as founder of the movement, Manet while regarded as an Impressionist and greatly respected by them, did not join their exhibitions as he did not set out to start a new movement, but to get the artists of the French Academy to recognise the need to move beyond attempts to portray a timeless classicism, and instead heed the promptings of the critic Baudelaire and focus on the contemporary world, which for them was the French Empire of Napoleon III and the Third Republic. 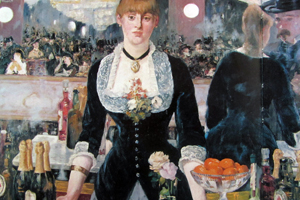 Manet recognised that in doing this Gustave Courbert  had lead the way with his powerful paintings of peasants, but  Manet as a privileged Parisian,  experienced the modern not in the rural countryside, as Courbet had with his peasant roots and socialist perspective, but in the crowded, cosmopolitan, fashionable, moneyed world of the upper middle class with their love of promenading in the park, and frequenting the bars, theatres and yes brothels of Paris. (Here we see At the Bar of the Folies Berg`ere) 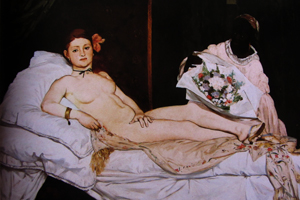 Will showed us how Manet explored subjects and compositions that had first been depicted by the acknowledged masters of the Renaissance, by transposing them to his own day. He often did this with an ironic twist (As here with Olympia) with the effect that they shocked the public and were rejected by the art establishment.  In the end however, by the time he died at the early age of 51 in 1883, his works were being accepted by the Academy and he had been awarded the legion d’honneur.

Will also pointed out how different the art scene in England was compared to France. The French had a top down approach with Art being supported by and at the service of the State, be it the Monarchy, the Republic or the Empire and this was done through the agency of the Academy. In Britain the Royal Academy was an association of artists who received no government backing and English art was not featured in the Great Exhibition of 1851. In France on the other hand, Napoleon III saw Art as part of the glory of French Culture when he promoted the International Exposition in 1867. At the same time it was in fact the work of English artists exhibited in Paris – Turner, Constable and the Pre-Raphaelites, that intrigued and inspired the French and lead to Impressionism.

Will also drew our attention to Manet’s wonderful use of paint, his arresting compositions and use of black, his beautiful depiction of still life and of course his fine and unusual portraits – currently on view in the exhibition at the Royal Academy.  In all it was quite a talk.