At 9.am sharp we pulled away from Wincanton in our shiny coach, stopping but once on the A303 to pick up a second large contingent to proceed with a full load. Everything had been beautifully organised for us by Jane Onslow. Problem. And it was a big one. The journey to Dulwich took 3.5 hrs.  London was in a state of near total traffic gridlock.  12.30pm we arrived and had lunch on the sunny lawns of the gallery. That made us feel better, together with knowing we had until 3.45pm to enjoy the art. 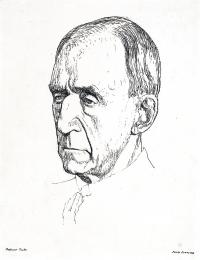 The exhibition we had come to see was “A Crisis of Brilliance” which followes the fortunes of six artists, Dora Carrington, Mark Gertler, Paul Nash, C.R.W. Nevinson, Stanley Spencer and David Bomberg who were all at the Slade just before the first World War. There they were rigorously trained by the surgeon turned professor of fine Art, Henry Tonks. His drawing on display exhibits the fine draftsmanship he was famous for and we were told he was an exacting teacher who expected students to spend over a year doing nothing but life drawings. (Portrait of Tonks) 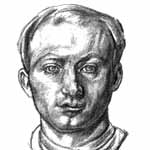 The first room showed the work the five did under Tonks.  All of them produced really fine portrait drawings, the most memorable for me being Stanley Spencer’s self portrait,(not on Google) and the most deviant, which caused Tonks to tell him he had no future in art, being done by C.R.W. Nevinson. (also  not on Google) Here already, as a young man in his early twenties, Nevinson had come under the influence stylistically of the Italian Futurists, a modernist movement strong in Europe but rejected by Tonks..

The succeeding rooms showed how In their different ways they were all deeply affected by the war with Nevison (and Tonks) having direct experience doing nursing and medical work at the front but  the ghastly nature of the carnage affected them all.. Several of them went on to become official war artists, and Nevinson in particular, became extremely well known and popular for his war paintings. 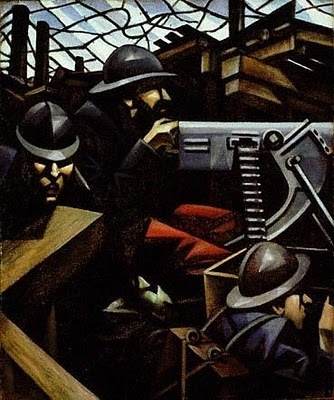 (The Machine Gunner by Nevinson. Not in the exhibition. Thank you Google)        While I had a small acquaintance with the work of Spencer and Nash, and while I was impressed by the work of all of them, for me it was the work of Nevinson who I had never heard of or seen before which I found a revelation.  Why?  His work has a brutal, powerful emotional intensity, but unlike the work of the proto-fascist Futurists, he had joined a Quaker ambulance unit and was saddened, angered and revolted by the war and this clearly shows. His work is high contrast with the powerful use of black, straight lines and sharp angles, and when he uses colour it is vivid and startling. At the same time his sense of composition is faultless.  Above all his work demonstrates total control of the mediums he uses, pencil, pen, lithograph, etching and oil. His drawing, while being non-realist, is amazingly precise, so he is able to say exactly what he wishes, no more, no less, and I think it is this precision that makes what I saw of his work simply unforgettable. Nowhere was this more evident than In his painting of a diving aeroplane drawn with distortions which emphasise its twisting descent set against a wall of subtly toned sky and clouds.  (This picture is very badly reproduced in the book A Crisis of Brilliance which does his works a disservice by ruining their colour) To see more of his work, in fact to see much of the work of all these artists, feed their names to Google and then click Images. You will be amazed if you have not done this before.

We had a good amount of time so I worked my way through the exhibition, discussed with other BAS members, looked around the rest of the gallery and plunged back to look at “the brilliant ones” again, in fact doing this three times. By the end of it I felt certain that C.R.W. Nevinson  deserves recognition as a really great 20th Century English artist and it would seem the first real English modernist. It appears he has been grossly underestimated, probably because he fell out with others in this group and incurred the displeasure of the Bloomsbury circle.. What struck me was I found my reaction to his works on show was not alone, I found two others reacting and noticing the same things as I had. So there you have it. Do you agree or do you think others were better? Please share your opinions. Email me your comments and I will add them after this article.

And yes it took us 3.5 hours to drive home. Still the whole day was essentially a wonderful experience for me.

Yes, many thanks to Jane for organising the day so efficiently and how lucky we were to have Ken, our regular coach driver, who, as usual, patiently dealt with traffic problems.
Apparently David Boyd Haycock who curated this revealing exhibition gave a talk on the story of the Slade School and this Exhibition on 20th June.  It would have been a privilege to have attended but instead I look forward to reading his book with the same title “A Crisis of Brilliance.”   A good phrase used by the exacting master of drawing Henry Tonks when he considered his gifted young students and the chaos brought by war.
Like you, John, I asked myself why Nevinson’s name was a blank to me.  I searched for postcards of his work in the shop; the printing of the p.c. of Spiral Descent does not do justice to the painting either. On returning home I looked for an entry on Nevinson in the Oxford Dictionary of Art.  It seems that some of his work as an official War Artist was  “considered too unpleasant for public viewing and was censored.”    His painting La Patrie made a deep impression, diagonal lines and angles in sombre shades of grey become the figures of French and German soldiers found dying of wounds in a goods yard, the composition is so sharply constructed.   His war paintings were a contrast to all the colour, action and smiling faces in his Dance Hall Scene painted between 1913-1914.
I’m so glad B.A.S. gave us the opportunity of seeing this exhibition; whatever method all of us might have chosen to travel; reaching Dulwich from here would not have been easy!
Thank you,
Frances
And Clive Dand adds:
Yet another excellent exhibition by the director of Dulwich Art Gallery.
It was interesting to view the drawings strongly influenced by that
wonderful teacher at the Slade, Henry Tonks “who was devoted to the art of
the Renaissance” and then to see how the six artists went on to develop
very individual styles and subject matter. I particularly liked the painting used
to promote the exhibition by David Bromberg In the Hold, painted when he
was 22 and then view his war painting Study of Sappers at work painted when
he was 28.
The Gallery is always worth visiting as it has a wide collection of art from
the sixteenth to the 20th century, including a number of outstanding
Rembrandts.