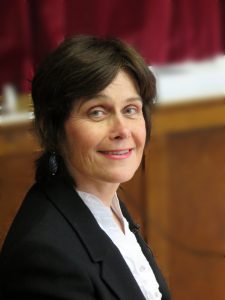 A large group of Bruton Art Society Members and friends came to hear a fascinating lecture by Alexandra Drysdale on the colour blue and its use in art from the Egyptians to the present day.  An accomplished NADFAS lecturer, Alexandra is both an artist and an art historian. In this talk she brought together considerable learning with practical experience to cover this most important topic.

Beginning with the brilliant use of blue in the tombs of the Pharaohs, she reminded us that blue was traditionally a very difficult and expensive colour to obtain. While browns and reds and greens can quite readily be derived from earth pigments, blue is a different matter. It only occurs naturally in rocks in very rare places. At the time of the Ancient Egyptians the only high quality blue that could be obtained came from the semi-precious stone  Lapis Lazuli. This was found in mountains in Afghanistan and was dangerous and expensive to mine and transport. In the ancient world Lapis Lazuli was more costly by weight than gold. This was to remain the case in the West right up to the eighteenth century, when rival chemically produced blues began to be marketed. 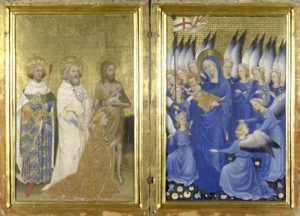 Alexandra gave examples of how the precious colour blue was used only on special occasions and for highly expensive projects. Not surprisingly, it took on mystical associations and was related to divinity. It was, for example, the colour associated with the Virgin Mary. A fine example of its use can be seen in the magnificent Wilton Diptych,[Fig.1]  created from Richard II of England circa 1395-99. 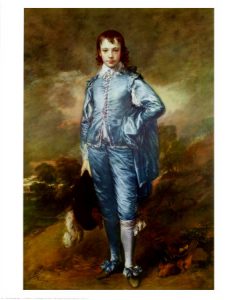 Alexandra then went on to look at how the effect of blue can be intensified by placing it against its ‘complementary’ colour, orange. An early example of this can be seen in the case of Leonardo da Vinci’s Virgin on the Rocks. Perhaps because of its association with the sky and with distances, blue tends to suggest recession in a picture. It has been used to create a sense of distance in landscapes ever since the Renaissance. However a skilful artist can counter this effect. A fine example of this is Gainsborough’s famous ‘blue boy’, in which the dominating figure is a dressed in a blue velvet suite. [Fig.2] Apparently Gainsborough chose to use this colour as a riposte to his great rival as a portrait painter, Sir Joshua Reynolds. In a lecture to the Royal Academy Reynolds had said that a painter should never have a foreground figure dressed in blue as the colour suggested distance and recession. Gainsborough showed how this did not have to be the case. His achievement is a reminder that one must not be too slavish in obeying ‘rules’ when it comes to producing works of art. 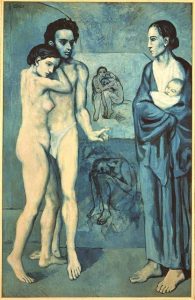 Since the nineteenth century the commercial production of colours by chemical means has meant that blue is no longer prized as a special and expensive colour. Yet it continues to fascinate on account of its emotive associations. Alexandra showed it was used in this manner by Van Gogh. In the early twentieth century the young Picasso made it the dominating tone in his melancholy images of poverty and suffering, [fig. 3] now known as his ‘Blue’ period. A little later the German avant-garde movement Der Blaue Reiter (The Blue Rider) dwelt on the more mystical associations of the colour. It was one member of this movement, the Russian Kandinsky, who moved from such reflections into the innovation of the first purely abstract paintings. 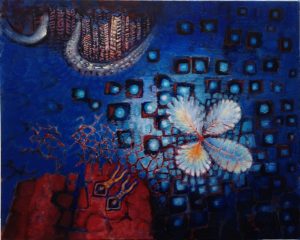 Coming nearer to the present age, Alexandra showed us some examples of her own work, in which blue has been used to great emotive effect.[Fig. 4]  She then ended with a most entertaining shot of one of the most sensations uses of blue in recent times. This was in connection with the celebration of Hull as European city of culture in 2016. One event staged by the performance artist ……  was a crowd of several thousand people roaming the street stripped naked and covered from head to toe in blue. It seems this was a reference to the fact that Hall had been the principal producer of the colour blue when this was used as a whitener for linen.

Altogether this lecture was a magnificent occasion, providing us with a wealth of information and a feast of fabulous imagery. It will be interesting to see whether this inspirational talk will lead to an outburst of pictures celebrating the colour in our forthcoming annual exhibition. Perhaps the Bruton Art Society is about to enter its ‘Blue’ phase…..
Will Vaughan

The team, without whom nothing would get hung! 69

Handing in day in progress for 69th Annual Exhibit