It is always a pleasure to go to the annual open exhibition of the Royal West of England Academy.

The principal showcase for art in this region, the Academy aims to include a wide and representative variety of the best work being produced, no matter whether this be traditional or avant-garde. This year, the 161th in the history of the exhibition, the standard was characteristically high. There may not have been any great surprises amongst the exhibits, but there was much of interest and value that repaid careful study.

As usual, there were names of note amongst the exhibitors. Going into the first small room on the right, one might have thought oneself for a moment in the New English Art Club exhibition at the Mall Galleries in London. For there, by the entrance, are two watercolours by that institution’s patron, HRH the Prince of Wales. His presence here is a reminder that his home principal home is little more than a sceptre-throw away from Bristol and that he can justifiably be counted as one of our regional artists. His view of’ Beinn A’bhuird, Cairngorms’, gives ample evidence of his high skill as a traditional practitioner of watercolour.

On the facing wall is a large interior by another dominant figure from the NEAC, Ken Howard, which shows that the practice of accomplished Impressionist-inspired oil painting is alive and well. 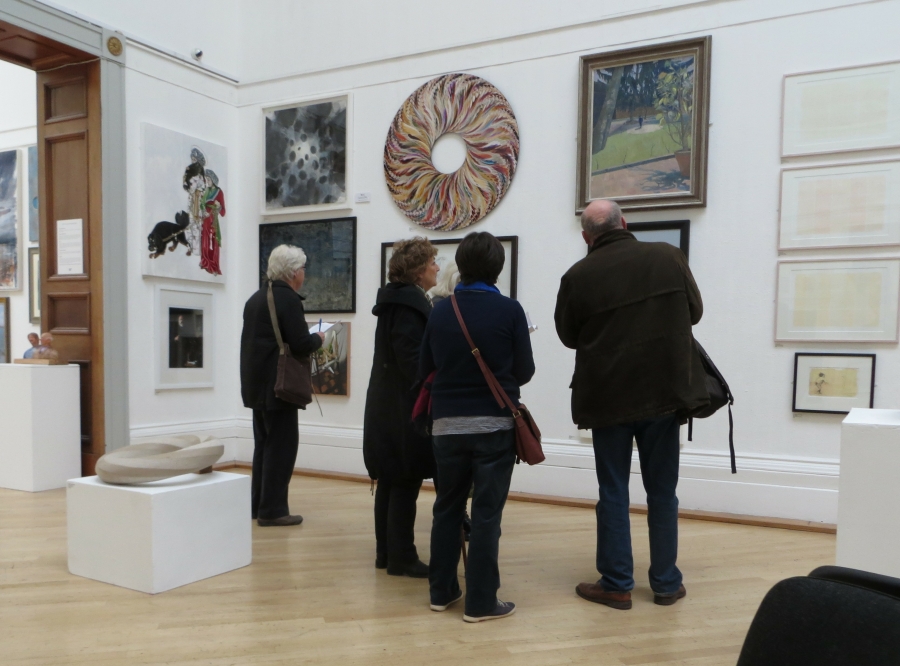 In the main room powerful canvasses dominated. A high artistic standard was set by Janette Kerr, the current President of the RWA with a couple of her near-abstract atmospheric sea paintings.  There were also bold works by a former President, Derek Balmer. I particularly liked his Estuary with its vibrant colours and swirl of forms. Another welcome inclusion, though on a small scale, was the evocative work of RWA academician Michael Porter, a subtle artist whose work is inspired by the Cornish Coast. Closer to home there were fine etchings by Bronwen Bradshaw of the Dove Studios near Glastonbury. Many were inspired by the familiar lines of the Isle of Avalon.

Coming even close to home, it was good to see the Bruton Art Society represented. Apart from an etching by Your Own Correspondent, there were fine paintings by Annie Frye and Kay Lewis-Lewis  –  for which these two  are to be congratulated.

The exhibition incorporated much sculpture. There were fine realist representations and some thought-inspiring abstractions. There were also welcome moments of irony and humour. These were perhaps best seen in Jason Lane’s animal forms made from reclaimed metal.

As a black and white artist, I was particularly taken by the Methuen Room which was dedicated to monochromes in a wide variety of media. Here there works of consummate craftsmanship such as the wood engravings of Howard Phipps. But there were also many inventive explorations of printmaking effects.

The exhibition gave less space to the most recent innovations in art. However, there are signs that this might change. Perhaps the most up to date work was by one of this year’s applicants for election as Academician, Terry Flaxton. This was an installation entitled ‘In other people’s skins’. It comprised a table laid for dinner, with dishes and the moving hands of the diners being projected onto them, to the sounds of a dinner party. The effect was compelling, if rather eerie. It will be interesting to see if Flaxton gets elected. I hope he does.

Terry also may have raised eyebrows by the price he was asking for his installation – £125,000! This was a record price here unsurprisingly – even well outstripping the £50,000 being asked for by Ken Howard for his interior. However the exhibition catered for all pockets, and most works were more modestly priced in the low hundreds. You could even pick up a small wood engraving for £20.

Altogether it was a most enjoyable day and we were delivered to and from our destination without any hitches.  Many thanks to Jane Onslow for organizing the event so well.

I turned up to see the exhibition on my own the next day and was pleased to find on asking that taking photos was allowed. In the days of the Iphone they are pretty impossible to stop. I’ve certainly  found much pleasure and knowledge is to be gained if one can shoot ( unobtrusively of course) and then enjoy again later.

Not much overlap with Will it seems. On discussing our reactions we both were pretty impressed and pleased to see BAS and local residents represented. I was particularly pleased to see photographs, paintings, prints and manipulated digital images all exhibited seamlessly. Increasingly we jump from one medium to another and I think this needs to be recognised.  Again the sheer subtlety and precision of fine drawing gets to me.

Please send me your comments and – if you have any particular ones you would like to share – your photos of the exhibition.