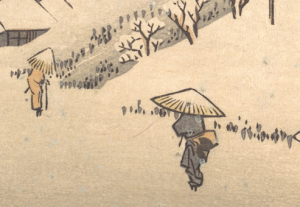 It is a special strength of Colin’s lecture that he encourages us to look at pictures carefully and in detail. Too often people are likely to think that they have seen everything about a picture in a few seconds. Colin demonstrated how much this is not the case. He did this at the beginning of his lecture by showing us details from a painting before revealing the whole of it. The work in question was Pieter Breughel the Elder’s marvellous Hunters in the Snow – a picture that Colin ( rightly in my opinion) claimed to be one of the greatest winter scenes ever painted. By this method he made us aware of the little figures on the ice and all the individual acts they were doing – skating, pushing sledges, gathering wood – or birds scavenging for food. From such details he was able to give us new insights both into the life of the period and also to the painting methods of the day. 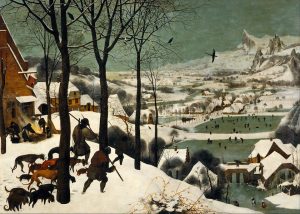 Colin’s lecture was truly enlightening as well as entertaining. We hope he may return one day to give us another demonstration of his expertise. Meanwhile, if anyone wants to

explore this further, they might try some of the recordings of his lunchtime lectures at the National Gallery which are now available on YouTube – His one on Constable’s Haywain is particularly to be recommended.

There were more than a hundred members of the society at this lecture, which was followed by an excellent festive party provided by members of the committee and helpers. Many thanks to all of those who enabled this event to take place.