BAS member Fletcher Robinson with his wife Marie-Helene and daughter Amelia share with us the artistic highlights of their recent trip to France.

‘February is never the most comfortable month in a cold old Somerset house so we decided to take Easy Jet to Nice for a few weeks driving around Provence looking at art.  Here are some of the highlights of the trip!

His beautiful house enjoys a wonderful position overlooking the sea, perched in its own estate above orange trees and ancient olives, the very same ones that can be seen in some of his paintings. The oranges, by the way,  are extremely bitter [ we picked some off the ground] but one of the staff said they make fabulous jam!  There are only a few of Renoir’s  paintings in the house, the best lent by the Musée d’Orsay, but many of his fabulous sculptures.

For me the highlight was seeing the views from his dining room and bedroom, and the collection of paintings by Albert Andre, one of the master’s pupils.  My admiration of this virtually forgotten artist was confirmed later in the trip by seeing his large ‘ Composition with Flowers and Fruits’ in the art museum in Toulon. 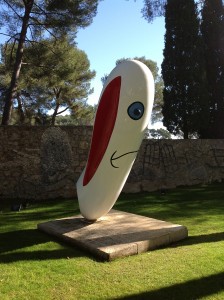 This is the place to see one of the most beautiful Chagall paintings in the world, La Vie.  The museum was built by Aime Maeght and his wife, Marguerite. He was a former furniture salesman who became one of the most important art dealers in France, representing Braque, Chagall, Miro , Giacometti and Calder. According to a recent article in the Economist, the Fondation is now on its uppers, finding it impossible to fund its reported £3 million  annual costs from visitor revenue. It cannot sell artworks under its present constitution, even though it houses 400 of them, many of fabulous value. It is indeed a slightly surreal experience to stand in the garden next to Giacometti’s Walking Man, another version of which sold for over  $100m in 2010. We thought the place looked very tired, with no-one there but us, and with bored guards standing around chatting loudly. Several of the rooms have been filled with some rather strident contemporary art, presumably in the hope of attracting more visitors. It is a sad truth that art is subject to fashion, and the likes of Calder and Miro are not the current mode. But for me the Chagall made it all worthwhile.

Sister Wendy Beckett’s favourite destination, with murals by Matisse.  He wanted to thank the nuns for nursing him back to health.  Its modest entrance and ticket desk staffed by elderly nuns do not prepare you for the magnificent simplicity of his designs, notably the Stations of the Cross, a masterpiece of imaginative drawing.

This is a museum I have looked forward to visiting for a very long time and was not disappointed.  The Musee D’Orsay has stepped forward and made some excellent loans of major pictures, backed up by many loans from private collections. Many of the exhibits have never been reproduced. The highlight for me was ‘Le Dejeuner’ , a painting of Marthe Bonnard and Bonnard’s brother-in-law, Jean Terrasse, which has rarely been seen since the 1930s.  Everywhere there are images of Marthe, the reclusive and difficult wife of the artist.  She disliked going out or receiving visitors, and famously needed to lie in the bath for several hours a day.  We tried to see their house above the museum, a modest villa called Le Bosquet where he lived from 1926-1947.There he painted some 103 landscapes, including 24 of the garden, and 153 of the inside of the house.  Unfortunately  it is only open a few days a year, and by prior appointment. Sargy Mann has published a fascinating book about Bonnard’s working methods, showing how Bonnard made tiny, quick but highly accurate drawings in and around the house, from which he painted his large canvases.
The walk there is quite steep and passes several sites where he did his drawings. It is marvellously interesting to see how a particular view would then be re-created into one of his imaginative creations. It is quite easy to get lost in the labyrinth of lanes above Le Cannet, particularly if you use the inadequate map supplied by the museum, and our little walk turned into a 3 hour hike as we tried to find the car! Luckily my long-suffering wife has a sense of humour.

4. Arles and St Remy, on the Van Gogh trail. 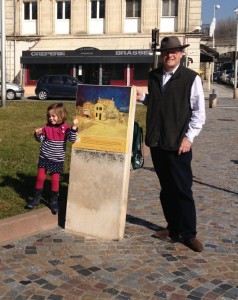 Arles is a beautiful but economically depressed town, dominated by the famous Roman amphitheatre. It is rather curious that Van Gogh did not paint it [ unless you count the building’s high roofline, seen in a distant view of the town from Montmajor] .We had lunch in the Cafe Arlesienne, next to the famous Yellow house in Place Lamartine where he entertained his friend Gauguin, and where he mutilated his ear-lobe after their famous disagreement.  The house has gone, destroyed by a stray bomb in the war, but inside the cafe there are photos of it on the wall. .   Similar thoughts about Van Gogh’s choice of subject matter occurred to me when we came to St Remy. A spectacular Roman triumphal arch, and the largest Roman funerary monument in Europe, lie within 300 yards of the main gates of the nearby asylum of St Paul de Maussole, where he spent 18 months. Can anyone explain to me why he did not paint them? He was allowed out, accompanied by an attendant, to do his paintings. Perhaps he wasn’t allowed anywhere near a main road? The reconstructed bedroom in the aslyum [ the so-called Van Gogh bedroom] was not actually his bedroom, which was situated in the adjacent block. That building is surrounded by the huge walled garden filled with pine trees, where he did so many of the paintings. It is not accessible to the public, as it is still used as a mental asylum  by around 100 patients. Rather poignantly, we noticed a modern day patient, accompanied by an attendant, walking outside the asylum in the lane.

Back in Arles, we had a coffee sitting at a cafe table next to the over-priced Cafe la Nuit, the cafe made so famous in the starry night picture. Not much in the view has changed. It is ironic that Arles does not own a single work by Van Gogh, the man they thought was a nuisance and a nutcase. The authorities have recently built a ‘ Van Gogh Foundation’ in Arles, which shows rather overblown and pretentious contemporary art for a steep entry fee. I shall merely quote one sentence of curatorial artspeak from the catalogue  describing the current exhibition of Yan Pei-mei’s huge paintings : ‘From great intimacy to media spectacularisation, he reassembles beings in the hutong [sic] of his painting’.  I think that says it all, really.

Given the difficulties of driving round the very complicated motorway system in the South of France, I wouldn’t say this was the most relaxing art tourism we have ever done. Aix in particular is a nightmare for parking, and it is best to head for the main underground car-park, if you can find it.  This makes a visit to Cezanne’s studio particularly challenging, as it is some way up a hill from the centre on foot, and the nearest underground parking is at the bottom of a long steep climb. I would say, however, that February is the best time to go. The sheer logistics of getting around in the crowds and the heat of summer would make it unbearable. We enjoyed a good many sunny days, and ended our stay with lunch outside in Nice on the Promenade Des Anglais!