On Thursday 12 April members of Bruton Art Society were entertained and
instructed with an hour long practical demonstration on portrait painting by
James Budden. 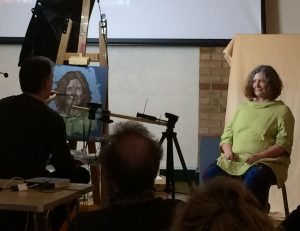 James is well known locally both as a fine portraitist and
inspiring teacher. Working with a model, and projecting his activities onto a
screen as he worked, he talked through the processes of setting up and
developing a portrait as he painted. The result was a fine study of a head and
shoulders.

It was remarkable to see the confidence with which he worked.
He started with a canvas with a mid-tone slate blue ground, and marked out
the main shapes before beginning to build up the individual parts, ending up
with the highlights. For this observer one of the most fascinating aspects of the
procedure was the way James concentrated on basic form first, only worrying
about individual features near the end of the process.

He remarked that some portraitists said getting the eyes right was the most important part of achieving a likeness, and that others said it was the mouth. He maintained it was neither of these. Rather it was capturing the spirit of the sitter. His resulting picture
seemed to bear this out, for it conveyed the countenance and demeanour of
the model every bit as vividly as individual feature.

Altogether this was a most valuable experience much appreciated by those
who were present.
Will Vaughan